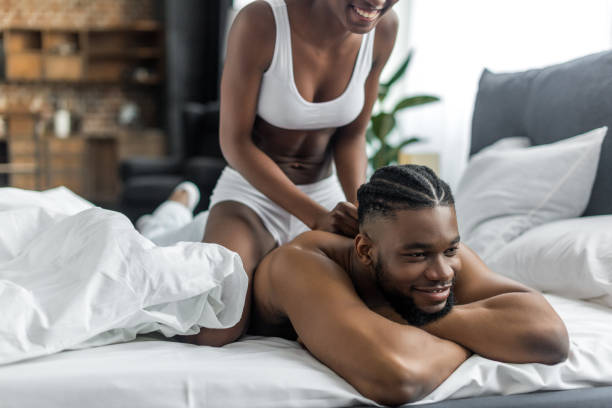 Women, even those that have been in long time sexual relationship do not know what their partners want.
A humans mind is very complicated and knowing what a person wants is very difficult. Every man is different and what he wants in bed is different.

This may be accurate but there are somethings that are common among men though. The real question here is knowing what your partner resonates with.

We at Mysp want you to know what your man wants in bed that is why we did some research and have come up with this article for you.

1. He wants you to show him how you want it

Men too can be very sensitive when it comes to having sex. Many women believe that men don’t like to be told what to do in the bedroom, but that is not entirely true.
Men like to pleasure their woman. They want her to enjoy having sex with them. Often times they might no know exactly what turns you on.

The best thing to do here is to show him what to do. Men appreciate women who teach them how to make love. He want you to show him how you like it.

The satisfaction that comes with satisfying your woman cannot be overstated. In case you don’t teach your man want you like, start teaching him from today because he really wants to know.

2. He wants to take things out of the bedroom sometimes

Who doesn’t like to try new things? Men also want to spice up their sex life. They want to try out sex in different locations apart from the bedroom.
Every man seeks adventure in every part of his life. Anytime your partner decides to take it outside the bedroom, don‘t refuse because his emotions may be hurt.
If he wants it in the kitchen or car, give it to him. Show him that you can share your love anytime and anywhere.

3. He wants you to initiate sex

Asking for sex may seem difficult sometimes for a man even for a long time lover. At other times he wants you to start things up.
He wants to be seduced and lured into having sex. Men are like children and want to be asked to do something they already love. Doing so tickles his ego and makes him feel wanted.
It gives the assurance that he is loved and it strengthens the bond between the two of you.

4. He wants to communicate with you

Communication is key to every relationship. Your man wants to know what you are thinking. He craves to be on the same page with you.
This is not just in bed but every part of your relationship. Talk to him, tell him what you want, when you want it and how you want it.
Don’t hide anything from your man because it can create a rift between the two of you. Communication leads to better sex and even better love life.

5. He wants to do something just a bit Kinky

Most men want to be dominant, it‘s in their DNA. Some want to be dominated because they are the dominant figures in their daily life.
No matter which one your man likes, it is up to you to give it to him. Work on his fantasies and play with him just right.
Before you try this out, talk to each other and set boundaries that you do not want to exceed so that you can do what you both will enjoy without getting too crazy.

Men also want to be heard. They want to talk about what they want both sexually and otherwise. Most guys are scared of talking about their sex fantasies because they feel it will make them appear weak and vulnerable.
Your man wants to talk to you about his fantasies because he knows you will understand him better. Give him a listening ear if he starts to talk and encourage him to do so.
You can also initiate such conversations to make things easier for him. Having such conversations can also make you two discover the kind of sex fantasies you two share together.

7. He wants you to be loud and moan as much as you want

Moaning means you are enjoying what he is doing. If you are a natural screamer then shout and moan as it suits you. Don’t hold back as it is also liberating to you.
Men love to hear this because they know they are doing something that you like. It turns them on and it‘s a sexy way of telling him to continue what he is doing.

8. He wants to try different positions

9. He wants you to be direct

A guy might act as if he knows exactly what a lady wants in bed but this is not true. He wants you to tell him what you want.
Don’t be shy of telling him when what he is doing is not working out for you. Tell him where you want him to touch you and how he should.
Educate your man on how he should have sex with you and what works for you.

10. Sometimes, he just wants to be lazy

Doing the same thing over and over again can become boring. Men like to explore and mix things up. Try things like morning sex, car sex or even public sex to spice things up.
Never make the mistake of sticking to one thing because you feel it‘s best. Always be willing to change and welcome change also.

For men, what they see equals what they get. He is attracted to what he see’s. Never fall short of letting him see you.
Expose yourself to him and let him get the whole view. This is also beneficial to you because it makes you confident around him.
During sex, make sure there is enough light around so that he see’s everything. He knows when you are comfortable around him and this strengthens your bond.

You love your partner that is why you want to know what he likes in bed, there are also other problems you could be facing that is why we are here to provide you with solutions.
Book a discreet test at our ONLINE PHARMACY or explore MYSP SHOP for the best sex toys and drugs to spice up you bedroom life.